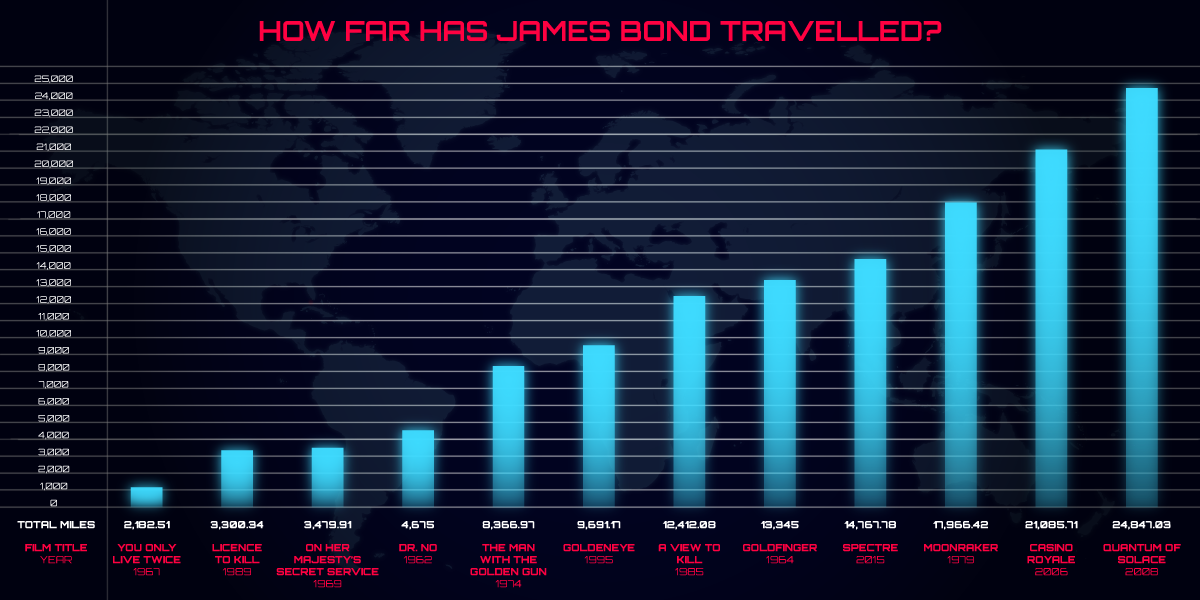 ·       The most travelled Bond films of all time are: Quantum of Solace, Die Another Day, and Casino Royale

New research by Simply Paving has found that Daniel Craig is due to go down into the Bond Hall of Fame as ‘the most travelled Bond of all time’ when he leaves the franchise after No Time To Die (released 30th September).

Accruing a staggering 75,643 miles over four film features and racking up 18,910 miles per film on average, he blows all other Bonds out of the proverbial water when it comes to air miles.

In fact, 31% of the total miles travelled across all the Bond films occur solely in Craig’s four (soon to be five) films. Craig also features in the most far-flung Bond film ever, Quantum of Solace (2008).

This film covers 24,847 miles in total. Data was collected by analysing every location visited per film and calculating the distance between each. The three most travelled Bond films of all time are:

When No Time to Die comes to cinemas, Craig will have covered around 90,000 miles, approximately 30% more than the next most travelled, Roger Moore. Will the next Bond travel further or will Craig go down in Bond history?

As for the other Bonds of times gone by, Roger Moore was the Martini-swigging protagonist of the most Bond films (seven in total), but surprisingly doesn’t travel the furthest (after Craig) on average. The 2nd most travelled spot goes to Pierce Brosnan, who achieved 11,302 miles over his short four film stint. Sean Connery may have been one of the most prolific Bonds, with six films under his belt, but he comes a withering 4th in both total miles and average miles travelled across his films.

A spokesperson from Simply Paving commented: “The globe-trotting Bond is very frequently away from home, catching planes, trains, and even rockets to get to his destinations! “While it’s a fantastic fantasy to be that well-travelled, in reality we Brits are much more comfortable with our feet up in our own homes, whether that’s lounging on the sofa or enjoying the peace and quiet of the back garden.  “For now, we’re quite happy for Bond to be the one who is running himself ragged all over the world!”