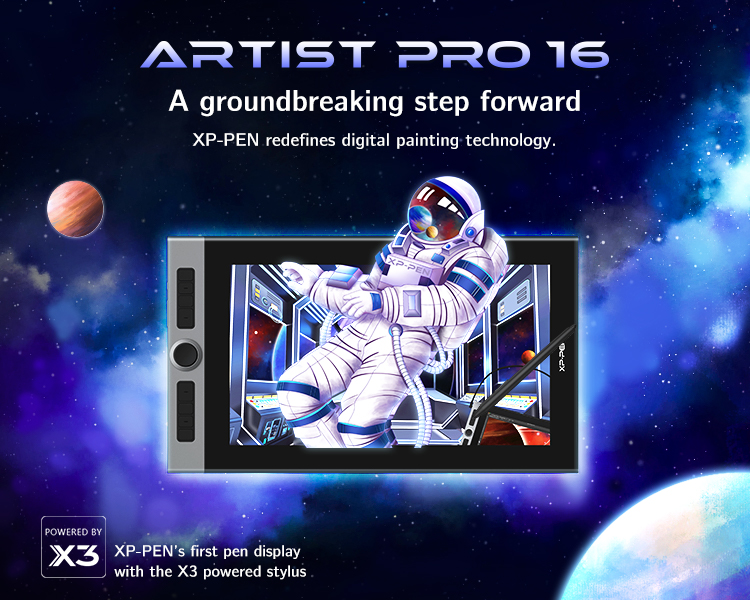 XP-PEN, a major player in the field of drawing tablets, is celebrating its 16th anniversary from 8.16 to 9.16. Together with the mega anniversary sales, XP-PEN also unveiled its exciting new products, including a 16-inch drawing display with their first revolutionary X3 smart chip digital stylus, and a 24-inch 2K QHD drawing display.

XP-PEN has launched its very first smart chip “X3” lately, which marked the 3rd generation of the digital stylus technology of the 16-year-old brand. Being made with sophisticated technology that dramatically upgrades the performance and structure of the stylus, the X3 is doomed to bring the XP-PEN into a new smart chip era. By encoding electromagnetic signals into digital data, the X3 increases 10-fold the sensitivity of the initial activation force (IAF to under three grams) and reduce the retraction distance to 0.6 mm. The new 16-inch drawing display to be unveiled on 8.16 will be the first XP-PEN product to be equipped with the X3 smart chip stylus.

The 16th anniversary marks a new start for XP-PEN, which was founded in Japan in 2005. Over the course of 15 painstaking years, XP-PEN has been dedicated to the research, design, production, and marketing of digital tablets. By now, the product line of XP-PEN has expanded to include the Star series graphics tablet for beginners, Deco series graphics tablet, and Artist series pen display for advanced users, with sales to more than 100 countries and regions around the world. A great surge of its market share over the years is making XP-PEN one of the most popular graphics tablet brands besides Wacom.

The 16th-anniversary celebration of XP-PEN is running from 8.16 and lasting for a month, together with new products release and big anniversary sales on its online stores globally.