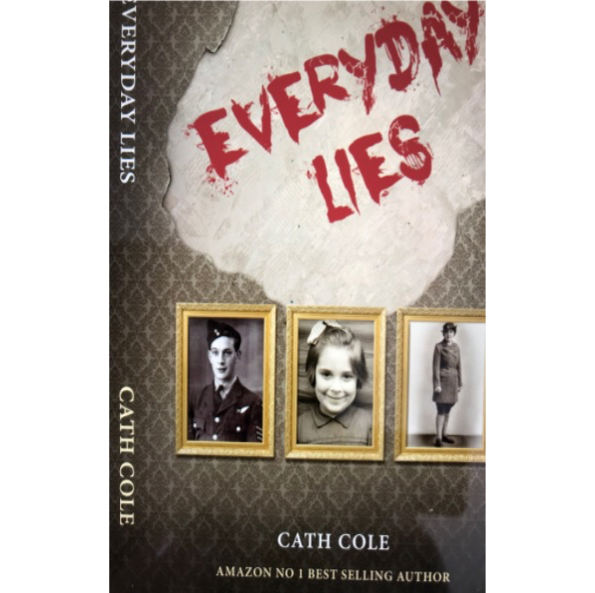 Local author, Cath Cole has recently announced the publication of her second novel, Everyday Lies: Fibs, Lies and Fairytales, which is now available from Amazon.

Everyday Lies is based on characters Sheila and Arthur Brooks and their daughter Elaine, who in the spring of 1954 are caught in a web of everyday lies, fibs and deceptions. Fibs and myths like Father Christmas, bogey men, wicked witches, mischievous elves and the origins of babies. Deceptions like, adultery, domestic abuse, illegal gambling and homosexuality. Can the family survive these untruths?

The novel is set in Bolton, primarily in Stoneclough, Ringley and Prestolee.

Speaking about the book Cath says: “The inspiration for the book came from the impact of WW2 on my parent’s marriage. My parents hardly knew each other when they married at the end of the war, having “courted.” while they were both on active service. My dad in the RAF and my mum in Cornwall in the land army. I don’t think they were unusual in finding themselves married to a relative stranger and having to adjust to post war life.  The narrative of the book reflects the essence of my parent’s relationship, and the hospital scenes are informed by my subsequent experiences as a student nurse.

“Writing Everyday Lies was a really important journey for me personally, as it helped me explore my origins in the Irwell Valley, and these origins gave me a strong sense of cultural belonging.  Whilst the story is a work of fiction, it is underpinned by a rich seam of personal, social and cultural experiences.”

Everyday Lies is Cath’s second book and follows the publication of her first novel – Home from Home – a true-to-life, moving story of five student nurses in the 1960s, which was published in 2015 and has been a best seller with Amazon, enjoying the number one position in the medical fiction charts in both the UK and Australia.

Growing up as part of a working-class family in Bolton, Cath trained as a nurse and health visitor, before moving into further education.  After a successful career in teaching, she later became a principal of a further education college and in 2004, after rescuing a failing college, she was appointed an OBE.

Cath adds: “I am proud of my northern working-class roots. My grandad was an illegal bookies runner and steward of the local working men’s club. My dad worked at the Chloride and my mum at the Co-op.”

Cath holds a Master of Arts (Creative Writing) from Edge Hill University and is a member of the Society of Authors. She has also had a long association with What’s Your Story, a Chorley-based local festival of the written word.

Everyday Lies has already received reviews of 4.8 out of 5 with readers on Amazon, with one of the reviews saying:


Cath Cole can be relied on to produce such a variety of great northern characters where dialogue is punchy and realistic.  Her settings are created with artful brush strokes and an astounding attention to detail, so whether or not you were alive then, you will be transported to the 50’s with its post-war exuberance and zest for life and only lightly covering the deceit and the lies.  Her plots are always intriguing and this one is no different. Great read.