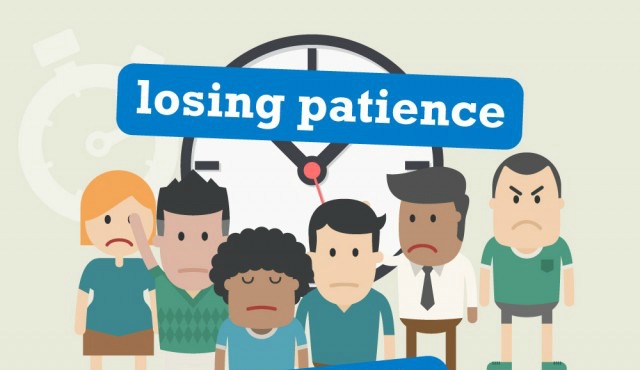 Have you noticed that you’re becoming increasingly impatient, and aren’t willing to spend more than a matter of minutes waiting for something to be done?

If so, you could be one of the 50% of Brits that admit to feeling more impatient over the last five years.

According to Inter Parcel, Brits have been found to spend just 10 seconds waiting for a web page to load. We also tend to wait just five minutes to be served at a bar, and a further ten minutes queueing to post a package or letter in the mail.

The biggest time that we’re prepared to wait is for our food in a restaurant, where we are likely to wait an average of 24 minutes after ordering our food until it being brought to the table.

Furthermore, 27% of people surveyed expected a parcel that they ordered online to be delivered within 3 days of ordering, with another 46% losing patience within five minutes of being on the phone to doctors. Another 30% admitted to considering another route after being stuck in a traffic jam for longer than 10 minutes.

According to the survey, men were more likely to label themselves as more patient, with 15% of men describing themselves as very patient – as opposed to just 9% of women surveyed.

The survey also found that 5.2% of women would class themselves as “very impatient”, compared to 4.6% of men.

Do you feel like you’ve become more impatient over the last five years? How long are you willing to wait for things to get done?